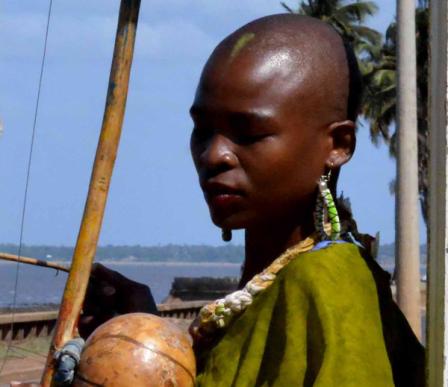 Born in a rural area of Swaziland, Thobile Magagula got her stage name, ‘Makhoyane’, when she decided to bring back to life the dying instruments Makhoyane and Sitolotolo which are also indigenous to Swazis.
"Makhoyane" fuses Swazi traditional instruments and styles of singing with other modern instruments, creating a traditional blues sounds.
She is co-founder and member of Spirits Indigenous, a music duo from Swaziland which was based in Maputo for almost five years.
She has collaborated and worked with different artists from Mozambique, Swaziland, South Africa and Zimbabwe.
Makhoyane has performed at House on Fire 1st and 4th BushFire Festival, Rooted Souls Sessions. (Johannesburg) Street Pop (2009), Soweto Arts Festival (2007) the Jozi Spoken word Festival (2008) and a number of venues and sessions including the Monday Blues.
Thobile has recorded songs for different films, documentaries and projects including the Tema Swati project (an all– Swazi- Women ‘unplugged’ album.